The time spent prior to “coasting out” is fairly busy for a flight crew. It is during this phase that the crew shall establish enroute communications via HF, perform SELCAL checks, verify RVSM capability and compliance, receive an oceanic clearance, verify that all fuel, hydraulic and engine systems are functioning properly, verify that all navigation systems are functioning and capable of navigating to the level required within the oceanic airspace, ensure that the aircraft will enter oceanic airspace at the cleared level at the appropriate time, obtain last minute weather updates to ensure that the cleared oceanic route is acceptable and establish the cleared Mach number for the crossing.

Establishing enroute communications can be a very time consuming task due to the fact that the flight crew must determine what frequency is appropriate. This changes daily due to the propagation of HF signals. It may also be time consuming because there may be many other aircraft on frequency attempting to establish communications and requesting clearances at the same time.

For an aircraft departing the US, Westbound toward Hawaii, the following procedure shall be used.

The radio operator will then readback all items that you advised and then issue a primary and secondary HF frequency for the flight. 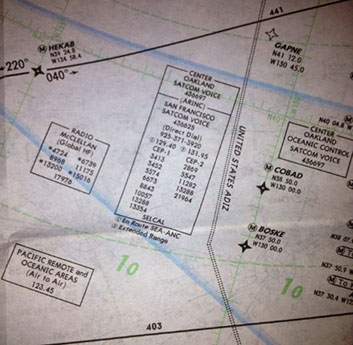 After a readback of the HF frequencies to the radio operator, the Flight Crew shall establish enroute communications via HF frequency. The number one HF shall be tuned to 5574 and the second HF shall be tuned to 8843. It is important to keep in mind that if the aircraft shares the same antenna for both HF transmitters that both HF’s are not tuned to the same frequency when transmitting, and it is recommended that the other unit be placed in STBY to avoid damage to the HF system. Pilots should, however, review their aircraft specific HF installation for details.

On initial contact with San Francisco radio via HF, the flight crew shall advise the same information that was provided via VHF frequency and request a SELCAL check and provide their aircraft specific SELCAL identifier.

At this point the radio operator will reconfirm all the information the flight crew has provided and issue a SELCAL check. SELCAL is a system onboard the aircraft that recognizes discrete tones sent over the HF which trigger a CAS message in the aircraft to alert flight crews that a radio operator is trying to raise the aircraft. The advantage of a SELCAL system is that the flight crew does not need to conduct a listening watch on a frequency which, due to the nature of HF, may have significant static and distortion.

1.  Communications with radio operators should be precise, read in a slow, deliberate manner with no jargon or non-essential phraseology. The radio operators may be thousands of miles away and there may be a great deal of distortion on the receiving end. It is also important to understand that you are now in international airspace and ICAO rules apply. All aircraft shall address their aircraft as N- November registered aircraft.

Eastbound Flights Over the Atlantic

Procedures for establishing enroute communications for eastbound flights over the Atlantic are very similar. Using the Atlantic Orientation Chart, the enroute frequency can be determined.

Once the proper HF frequency has been obtained and SELCAL checks have been conducted, the aircraft shall advise the current ATC controller that enroute communications have been established. One key difference between flights departing out of the United States over the Pacific versus flights over the Atlantic is that the initial clearance received on the ground also constitutes a Pacific oceanic clearance, whereas a flight over the Atlantic generally requires the flight crew to obtain an oceanic clearance. Exceptions to this would be New York airspace, for example. Regardless, it is important for the flight crew to determine in advance whether they are cleared into oceanic airspace prior to entry. 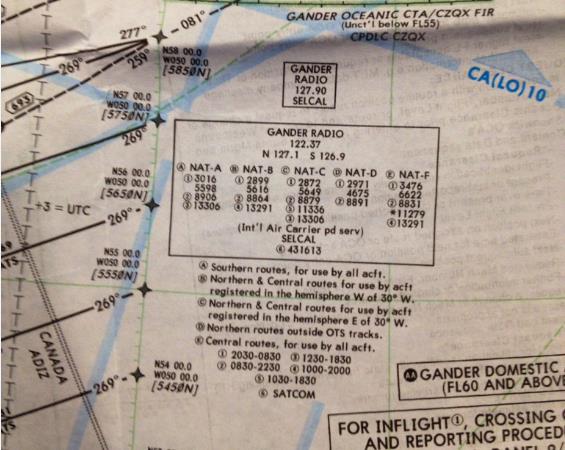