While operating in Class II airspace or a non-radar environment, it is critical that time estimates are correct. Controllers will expect aircraft to cross fixes with three minutes of their estimate and in some cases within two minutes or else a revised time estimate is required. For that reason pilots shall use the following SOP’s to ensure that the clocks in the aircraft indicate the correct time.

Longitudinal separations between subsequent aircraft following the same track (in-trail) and between aircraft on intersecting tracks in the NAT MNPS Airspace are assessed in terms of differences in ATAs/ETAs at common waypoints. The longitudinal separation minima currently used in the NAT MNPS Airspace are thus expressed in clock minutes. The maintenance of in-trail separations is aided by the application of the Mach Number Technique (See Chapter 7 – “Application of Mach Number Technique”). However, aircraft clock errors resulting in waypoint ATA errors in position reports can lead to an erosion of actual longitudinal separations between aircraft. It is thus vitally important that the time-keeping device intended to be used to indicate waypoint passing times is accurate, and is synchronized to an acceptable UTC time signal before commencing flight in MNPS Airspace. In many modern aircraft, the Master Clock can only be reset while the aircraft is on the ground. Thus the pre-flight procedures for any NAT MNPS operation must include a UTC time check and resynchronization of the aircraft Master Clock (typically the FMS). Lists of acceptable time sources for this purpose have been promulgated by NAT ATS Provider States. A non-exhaustive list is shown in Chapter 8 of this Document. – NAT Doc 007

On the navigation envelopes published by Scott IPC there is a line item for checking the clocks prior to departure. The clocks shall be referenced to the UTC time in the FMS. The FMS gathers the time from GPS satellites and will be the most accurate time reference available.  In the Honeywell FMS, the time can be accessed by selecting NAV page, Position Sensors page, GPS Status. Once the correct time is determined set all clocks to this time reference. It is also advisable to only provide time estimates to ATC and to record positions in the Journey log using FMS time in UTC. If an aircraft clock is found to be unreliable it shall be deferred according to the aircraft specific MEL. 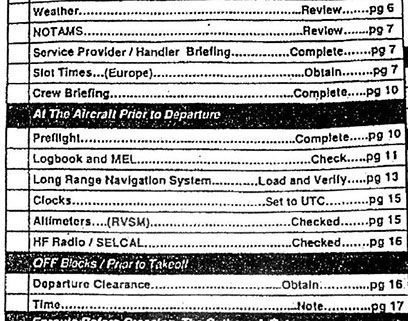