ETOPS was originally developed for aircraft operated under 14 CFR 121 and was originally defined as “Extended Range Operations with Twin Engine Airplanes”. Since the inception of ETOPS, the program has expanded to include aircraft with more than two engines and includes 14 CFR 121 and 135 flight operations. A more accurate definition at this time would simply be “Extended Operations.” Check to see if your company is ETOPS certified or bound by FAR 135.364 which states:

“After August 13, 2008, no certificate holder may operate an airplane, other than an all-cargo airplane with more than two engines, on a planned route that exceeds 180 minutes flying time (at the one-engine-inoperative cruise speed under standard conditions in still air) from an Adequate Airport outside the continental United States unless the operation is approved by the FAA in accordance with Appendix G of this part, Extended Operations (ETOPS)." 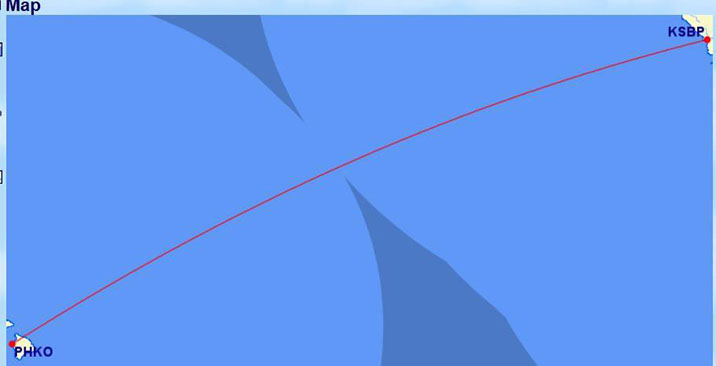 The next step in the process is to utilize mygdc.com or great circle mapper- GCMAP.com. Both of these websites have ETOPS plotters which draw 180 minute arcs from a given waypoint based on your selected true airspeed. In order to determine ETOPS compliance, crewmembers shall select suitable airports nearest the coast-out point and coast-in point and shall manipulate the single-engine true airspeed so that at no time during the flight is the aircraft more than 180 minutes from a suitable airport. For example, a flight between KSBP and PHKO would require a single-engine TAS of 347 knots, or a distance of 1043 NM. 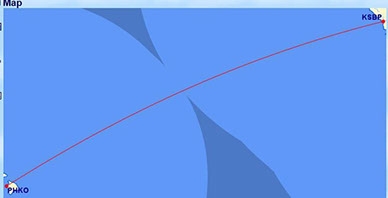 KSBP to PHKO would require a single-engine 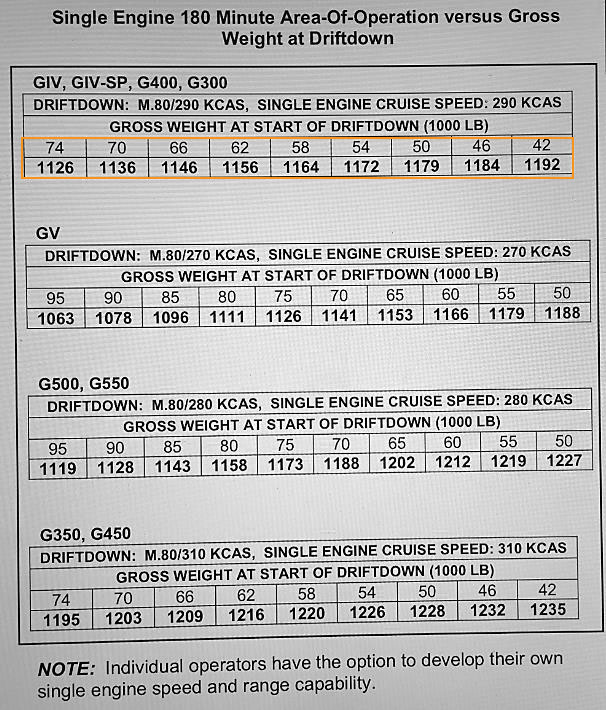 Gulfstream uses a slightly different system for determining ETOPS ranges. This information may be found in the OIS supplements. For the G-IV the appropriate reference is GAC-OIS-03. “Gulfstream’s approach is to define the non-ETOPS area of operation (distance flown in 180 minutes on one engine) using a relatively high speed schedule, but assumes that an actual diversion would be flown at single engine long range cruise speeds. Gulfstream then publishes distance tables which represent the maximum capability of the aircraft to reach a given alternate within 180 minutes.

The table to the right starts with Mach .80 from the cruise altitude to the appropriate drift-down altitude. In the example above the midpoint distance between KSBP and PHOG was 1043 NM. When evaluating this table , there is no distance less than 1043 NM. 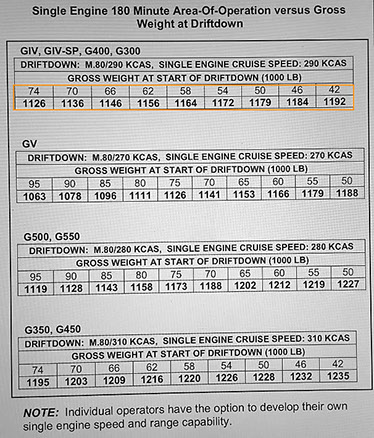 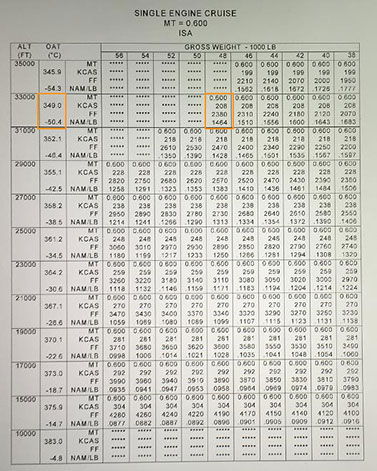 It remains the responsibility of the flight crew to determine that adequate fuel exists when evaluating alternate airports and various contingencies that may occur in flight.  An alternate method of evaluating ETOP’s may be found by referencing the single-engine cruise tables.

For the Gulfstream these cruise tables are published in the planning and performance section of the aircraft operations manual.  The Single-Engine Cruise table for Mach .60 is to the left. Once again, using the example from above, the required airspeed given a distance of 1047 NM is 347 Knots. 347 Knots is achievable at a weight of 48,000 lbs. and would require a drift-down to an altitude of FL330.